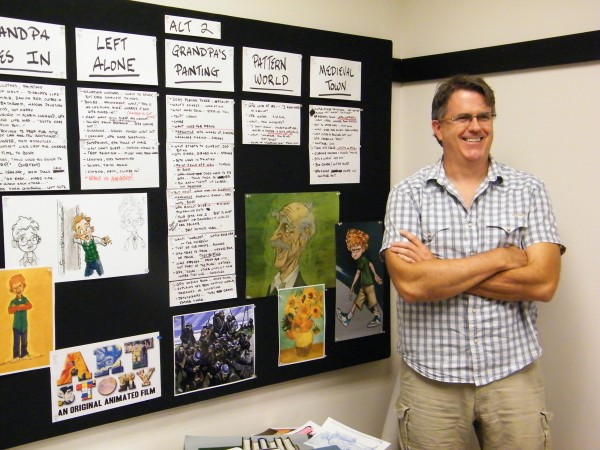 Ever look into a painting and wonder what lies beyond the frame? This is the basis for the original animated film Art Story, from animation veterans Aaron Blaise and Chuck Williams. Last week, the team at Traditional Animation traveled to West Palm Beach, Florida to meet with Producer/Director Chuck Williams to learn more about their animated CG/traditional animation hybrid project. On this rainy summer afternoon, we sat down with Chuck in the production story room, which had walls covered with some of the world’s greatest paintings containing the protagonists from Art Story. Chuck and Aaron have taken their story to the public with a Kickstarter campaign to help raise funds to get this project off the ground. What they are developing is truly one of the most original and innovative animated films that we’ve seen in years. It needs the help and support of movie-going audiences who want to see something other then the endless sequels and retreads that plague the animation industry today. 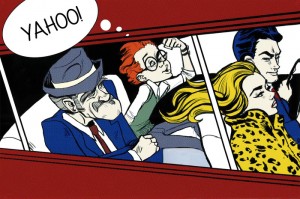 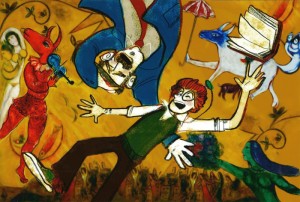 Portrait of an Artist

Chuck grew up in a family of film buffs. He attended the Florida State film school and, soon after graduating, he was one of the first hires at the new Disney Florida animation studio. There, he was hired to edit the studio’s first animated short Roller Coaster Rabbit, which was the second in a series of shorts based on the highly successful Who Framed Roger Rabbit film from 1988. For the first 5 years, Chuck worked as editor, and then from there transitioned into “special projects.” 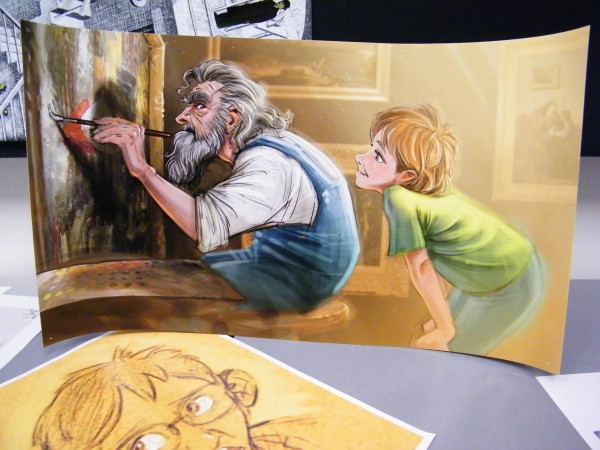 “I was director/producer of projects, which were varied as park films, commercials, and video games. I learned the ropes of all aspects of animation filmmaking. I spent 21 years with Disney and went on to produce Brother Bear, the swan song for the Florida animation unit. After the Florida studio closed, we moved to the California studio to develop the film King of the Elves. With an opportunity to come back to Florida, we took the chance with Digital Domain where Aaron and I were the first two hires on the film The Legend of Tembo. It seemed like a dream come true. We thought the financing was in place, but within three years the studio filed for bankruptcy and closed. It’s a shame a lot of good people were hurt. We were one month from production when the studio shut down. They tried to get it (Legend of Tembo) through bankruptcy, but realized it wasn’t going to happen. We decided to follow different paths. This has led us to develop our own projects like Art Story.” 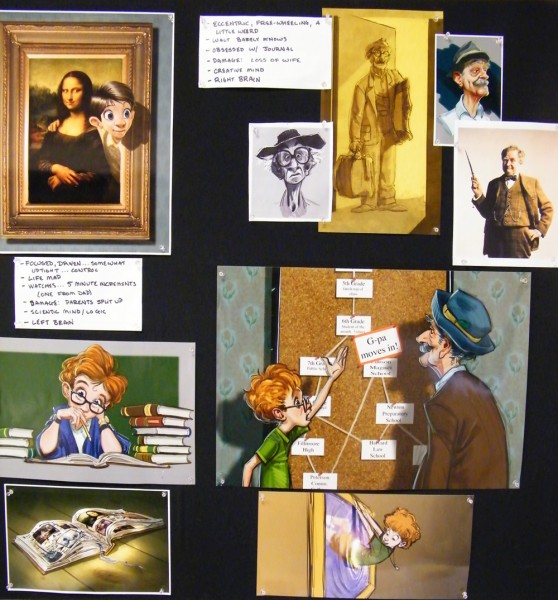 So what is the story of Art Story? “Do you know the story of Pygmalion?” Chuck asks, “In ancient Greek mythology, Pygmalion fell in love with one of his sculptures, which the Gods brought to life.”

Chuck then lets us in on a few details of the plot and what to expect.

“Our film opens with a prologue where we meet the grandfather when he was young and his girlfriend who is an archeologist. She has found the Pygmalion myth to be true and has found the Pygmalion statue pedestal, where she had walked off. She also found a chunk of stone from that sculpture. Grandpa, playing around holding the stone, trips and falls directly into a painting and realizes that holding the stone allows him to pass through paintings. That’s the magic of how this world works. We jump forward some 60 years later, and we meet Walt who is a kid from a broken family after his parents’ divorce. He is a focused, sort of a neat freak, type of kid who has mapped out his future from getting into an Edison magnate school to Harvard Law. His world is turned upside down when his crazy, eccentric, loopy grandfather comes to live with him. Walt’s Grandfather has 3 prized possessions that he has with him at all times. He has the painting Dogs playing Poker, a jumbled up book, and this weird carved stone. The two just don’t get along, as the grandpa just doesn’t fit in with his life plan. One night Walt thinks he sees his grandfather coming out of his painting. Later that night, Walt, curious, goes to his Grandpa’s room as he sleeps and touches the painting, and notices it’s solid. Then he spots the stones and tries again, this time his hand goes right through the painting. Entering, he comes face to face with the aforementioned dogs playing poker who start to growl and chase Walt, who scrambles to get out of the painting. 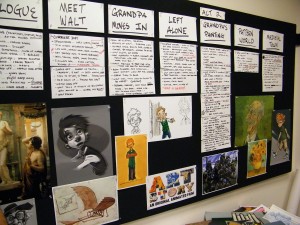 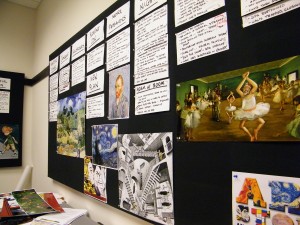 The noise wakes grandpa up who attempts to pull him out, but the dogs who have Walt by his shorts pull Grandpa into the painting causing the painting to fall to the floor trapping them inside the world of art. Thus begins the Journey of getting out. Walt needs to get out in time to take a test to get into the prestigious school. With just the use of Grandpa’s book, they begin to map out how the paintings are linked together by source of inspiration from one artist to another. The book is also a way to find a long lost painting of his wife’s (the woman in the prologue). So if he can find that painting, he can be with her again. All the while a mysterious painted villain who wants the stone to enter the real world is in pursuit.

So our story has that emotional depth along a world to set them in. In each world the physics will change, in a Chagall they will float, in an Escher, which way is up? Which way is down? The melting world of Dali has its own problems for our characters. A Lichtenstein they could yell in word balloons. The way the world works is not limited to a frame the other artists’ work extends the setting.

Say in a Van Gogh you could walk through a sunflower field during the day and end up as the sun goes down in A Starry Night. When asked where the genius of the project stemmed from, It started with the technology. The ability to go into Photoshop and play with the brushes and paint like Van Gogh. Take the swirly stars of A Starry Night and make them move. Where we hit on the story, Aaron and I started talking about our relationship with our grandfathers, when I was 8 he took me on trip to Canada. At first we couldn’t get along, but by the end we were “thicker than thieves.” You just have special relationship with your grandparents.” 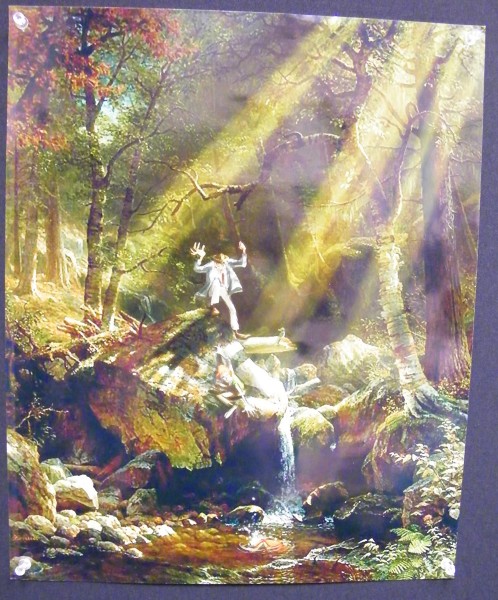 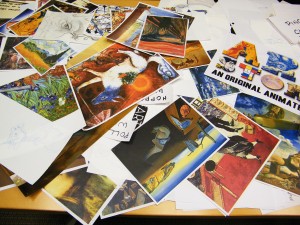 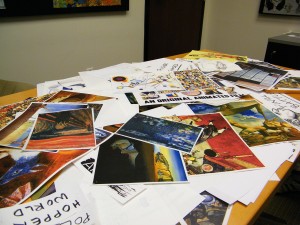 This spectacular setting, inside the masterpieces of art history will lend its self to the animation process that will be a feast for the eyes. Chuck said,

“We always believe it’s not the technique, it’s the story you tell. This blends technique in an organic way, that’s part of the story, that each of these artists has found individual voice to create their masterpieces. This is the lesson that Walt has to learn. We want to employ the talents of 2d, 3d and maybe even some live action to tell the story in the best way possible. One of the concepts behind the film is we want to move from one broad bold style to another broad bold style. Jumping from different styles and art allows you to do that! In possible sequels we could use street art, we could go to advertising art, or maybe even to album art. I mean who wouldn’t want to dance on the cover of Pink Floyd? There are scenes that scream traditional animation; scenes like Lichtenstein will best be visualized using hand drawn animators. When something gets a little more rendered and dimensional with lots of different types of shading you probably want to go CG (Computer Generated) and the nice thing about this is we can farm out scenes/sequences to different studios and artists around the world.” 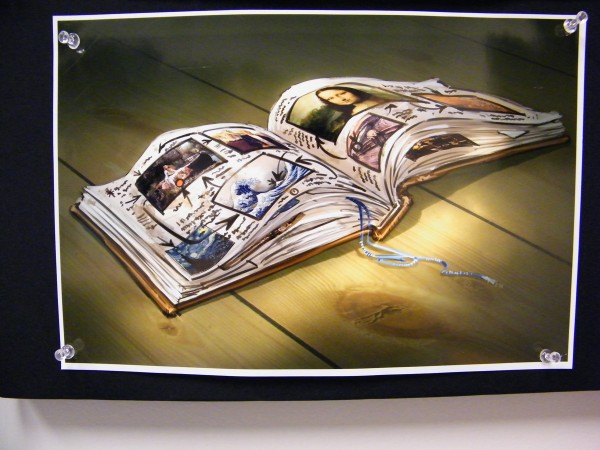 When asked about the possibility of getting animation legends like Glen Keane and Andreas Deja animating on the project, Chucks says with a smile: “Way ahead of you. There’s so much talent out there in the 2d world that we would love to get to work on a film of this scope and size. Just Imagine Glen Keane animating some Leonardo Da Vinci sketches, in which Walt and Grandpa are using his flying machine to escape from the villain, another possible 2d sequence.” 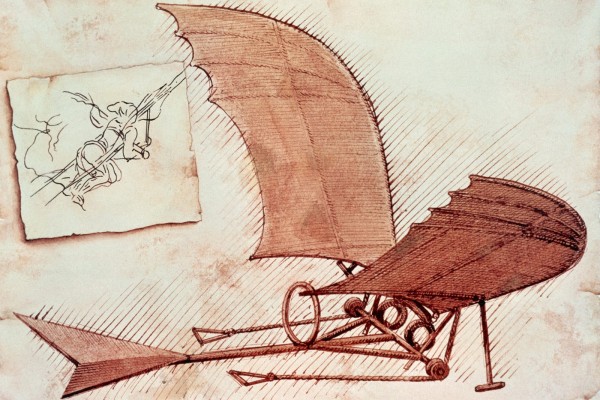 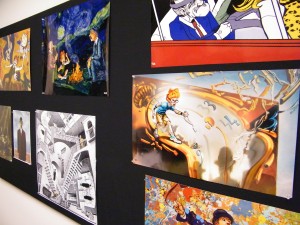 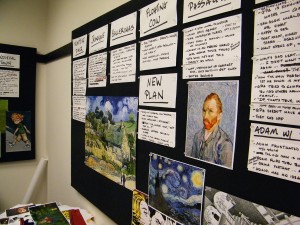 Chuck mentions that they “are still a ways away from that. It’s the first thing we have to do once the Kickstarter campaign is over and hopefully successful. It’s the right first step. Then we have to go find investors to fund the millions of dollars to do the film the right way. Then we find and test the Production houses.”

They are confident they can create a film that will be beloved by both fans of animation and fine art. 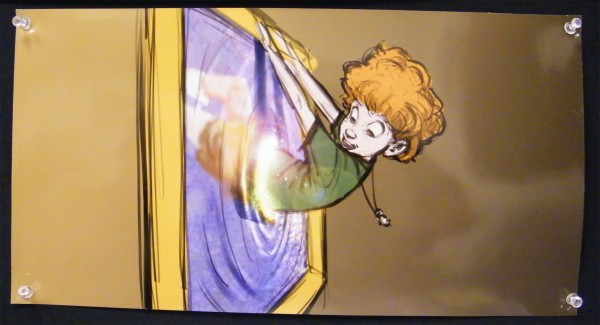 Chuck discusses the importance of the process involved in creating an animated film.

“One must make a compelling story with characters to match. Most animated films you watch are mediocre to really good, there are very few animated films that are really bad. In live action films there are tons that are bad, a few that are mediocre and some that are really good. The script in live action is the crossroads to green light a project. No matter how good a script is, words don’t do justice to the medium. We use a visual medium, we deal with picture and sound. The reason I believe most animated films have a great track record is because of the process of putting story reels together. It’s basically a rehearsal in the medium with picture and sound. Do the funny parts make you laugh? Do the sad parts make you cry? Does the action get your heart racing? This is the process that can make a film work. The fact is, 96% of animated films widely released in the US make their money back. This is the objective for the Kickstarter campaign, to have the time to create the art and story. Our art directors on this film are, Picasso, Renoir, Monet… we have the best, undeniably the best art directors a film has ever had.”

So it’s up to us, the animation fans, art lovers, and film enthusiasts to help get this original idea off the canvas, and onto our movie screens. 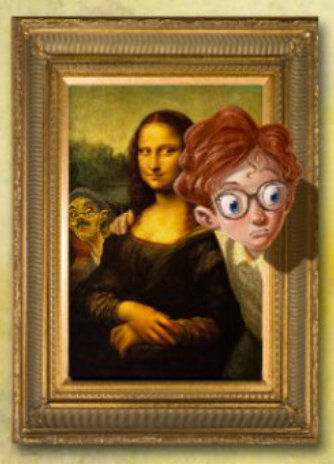