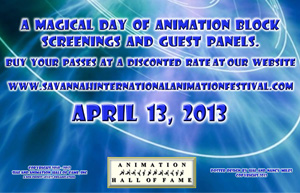 – From the Animation Hall of Fame Press Release.

“The Citrus Cel Animation Film Festival (Citrus Cel) celebrates animation as a cultural and commercial medium with three days of screenings, parties and panels in Jacksonville, Florida. Citrus Cel will act as a hub for students and professionals from the fields of animation, design, illustration, and film, as well as add to the growing cultural landscape of festivals and events in northeast Florida. ”

“CTN Animation Expo is held every year in Burbank, CA. Come mingle with animation enthusiasts and professionals from around the world. The only event of its kind presents a unique opportunity that brings together the top professionals from both the traditional and digital worlds of animation. Hosted by the Creative Talent Network.”

“The Savannah International Animation Festival is the premiere animation festival of the southeastern United States, attracting animation buffs, cartoon fans, filmmakers and art lovers from around the world. ”

“CTN Animation Expo is held every year in Burbank, CA. Come mingle with animation enthusiasts and professionals from around the world. Among the professionals present will be: Dan Hahn, Andreas Deja, Gary Goldman, Bill Plympton, Oscar Grillo, Jerry Beck among many other.”