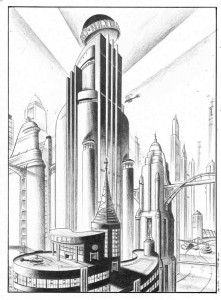 Q: Who is Marc Lumer?

Marc Lumer is an Illustrator, graphic designer and visual development artist. Since 2000 he is the principal at Marc Lumer Design, a graphic design and illustration studio based in Los Angeles. He is the illustrator of 5 published children picture books and has created illustrations and designs for Acura, Honda, the Major League Baseball, Budweiser, and many others

Q: What cartoon shows or movies have you worked on?

Superman the Animated Series, Batman Beyond, Steven Speilberg presents Freakazoid, The Gargoyles, Ray Gun, The Road to El Dorado, The Prince of Egypt. and a slew of projects in development. 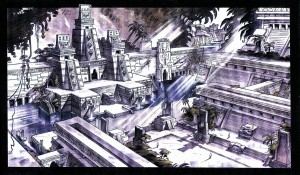 Q: Can you tell us your background, school?

I studied art and graphic design in Brussels, Belgium.

Q: How did you get the job working for an animation studio?

I was living and working in Europe and doing commercial illustration, graphic design and comic books. During a trip in Los Angeles in 1994, I met with John Kricfalusi of Spumco. He liked my work and introduced me to Bruce Timm and Eric Rodomski of WB TV animation who hired me and moved me to L.A. Working in animation was never planed and it always amazed me that they hired me, since I had never worked in this field before and I that most of my work had been in graphic design and illustration.

Q: What is it like working on a cartoon television series compared to an animated film?

Time.
The pace, though working as a visual development artist I never had the time pressures production people are submitted to. Also I never worked in computer animated projects, so I don’t know what that is like.

Q: Some advice/tips for people who want to get into making cartoons for television or film?

Get into 3D animation. I think that is where a majority of the work will be in the future.

Q: And how many hours/man power to create a single Batman Beyond episode?

I really don’t know. The Los Angeles crew was in charge of creating the production package, including script, boards, props and key backgrounds, but then this was all shipped oversees to be animated. Even back in the 90’s very little of the TV animation was done in the US. It would take us two weeks to turn around a half hour episode and it would come back fully animated a few months later. 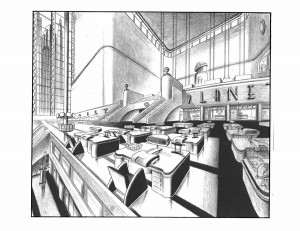 Q: What are currently working on now?

I am working on an illustrated children book due out next year and am involved in the day to day operation of my design firm.

Honestly, working in animation for me was one of these freak occurrence. My initial plan, when moving form Europe was to go to New York and work as a free lance illustrator. When Warner Bros. offered me a job, I figured that this was an easy way to get legal working papers and regular work. After that I really enjoyed working for big studios such as Warner and Dreamworks, but I enjoy drawing by hand even more and when I saw that most of the work was becoming computer generated I knew it was time to go back to my initial carrier as an illustrator.