I saw A Cat in Paris, directed by Jean-Loup Felicioli and Alain Gagnol, at the 2011 Florida Film Festival and was completely and utterly blown away by how amazing this film is. The festival screened it at the Garden Theater in Winter Garden, FL (home to the famous Theme Park Connection shop which, unfortunately, I didn’t get a chance to poke around in that day).

Let’s start with the “bad”:

The only bad experience about seeing it at the Festival is that the BluRay disc they were projecting it off of kept freezing every couple of seconds… like it was a scratched or something (I thought that was nearly impossible for a BluRay to get scratched… that’s the whole point right? Sturdier disks?). I thought it was intentional at first when it was happening during the credits, but I knew something was wrong when it started stopping in really awkward places.

We tried to get the film festival workers to start the film over and check the disk but our requests were shot down. The refused to start it again for some reason… and the film wasn’t even two minutes in. I would’ve rather started over and seen the stylish opening titles again without the constant “start…stop”.

The funny thing is that the short they showed before the film (The Gruffalo’s Child, a really delightful CG short) didn’t have any problems and played perfectly so I was ready, with popcorn and iced coffee in hand, for an ultra smooth traditionally animated ride. *sigh* I really want to see the movie again (which is coming back for a theatrical release in June!) because there are some elaborate shots that probably look beautiful in full motion.

Anyway, enough with the bad. Here’s the good:

The movie, in my opinion, is perfect. It’s beautifully animated, the characters are all interesting and have their own unique quirks (even the “background” characters), and it’s very sharply written. In a world of loud animated movies full of wise cracking characters, screaming, and 80s music dance offs over the end credits, this movie was a breath of fresh air. I really can’t say a bad word about it other then the projection issues which isn’t the film’s fault in any way. Really, it was a testament to how strong the film was story-wise that I was still able to tell what was going on even with the freezing.

This is the type of movie American studios should be making but unfortunately most big American studios (with the exception of Pixar) still stick animation in the “kiddie genre” box and don’t allow anything other then the usual stories and characters to come to life. And the few that do make it under the radar stay under the radar (such as Fantastic Mr. Fox, Rango, Coraline, and Aardman’s Pirates: Band of Misfits). 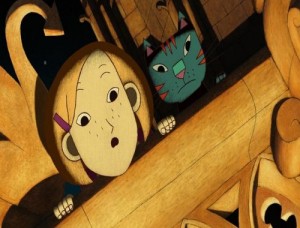 Anyway, A Cat in Paris is getting an American theatrical release on June 1st, 2012 so go see the movie if it’s playing in your city (I know I will!) and buy it on BluRay when it comes out. You won’t be disappointed!

P.S. I saw the film in French so I don’t know how the English dub will be. I’ll post a follow up review for the English version of the film. I posted the English trailer below, dub sounds pretty good actually. The voices seem to fit the characters okay. Just hope it’s better then the flat Persepolis dub.