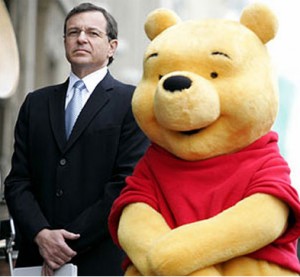 Robert Iger was named president of Disney in 2000. Then in 2005 he succeeded Michael Eisner as chief executive. He also oversaw the acquisition of Pixar in 2006. He has brought a lot to Disney and 65 is a good age for retirement. If one plans to retire that is. I know some who want to work until the end! Thank you Mr. Iger for your years of service. Hope you do some great things before you are finished at Disney. A few new traditionally animated features maybe??

“Walt Disney Co. said Robert Iger will step down as chief executive in 2015, setting the stage for a new contest to decide who will lead one of the world’s biggest media companies.In a surprise announcement, the company said the 60 year old will add the title of chairman in March 2012, and will remain executive chairman until June 2016, at which time he is to retire from Disney at the age of 65.

For investors and Disney watchers, the move was a sign the board is eager to lock Mr. Iger in for a significant period of time, while also assuring an orderly transition when he departs.” – Wall Street Journal
Source Article